Why are Elephants Gray?

Why are Elephants Gray?


Why are elephants gray? It is a question I have often asked myself but as yet have no satisfactory answer to. It isn't such a stupid question as it appears at first sight. Apart from man and then only recently, elephants have no natural enemies. They are genuinely the lords of all they survey. So why should the color of an elephant be important, apart from causing me a few sleepless nights?

Elephants have no need of camouflage. While they can move quietly should they wish it, they are not normally quiet. There is no hiding amongst the dappled shadows and light beams trying to pass themselves off as something they are not á la giraffes. Normally color in animals is a means to one of three widely disparate ends. In many species the male is bright and showy and attempts to bedazzle the female with his brilliance. Evolutionary biologists believe that this apparently suicidal tendency indicates to the female that the displaying male's genes must be good, as he has survived to reproductive age despite the handicap of standing out to predators. It may be noteworthy that in the species in which males are bedecked in finery, the females are usually nondescript.

The other use of brilliant colors, usually in both sexes, is as warning coloration. The wearer of the Technicolor dreamcoat is telling the world of potential predators that they are unpalatable at best and deadly at worst. In general, the natural world rubs along quite nicely using this formula though there are the free-loaders which occasionally make it fall over for everybody. 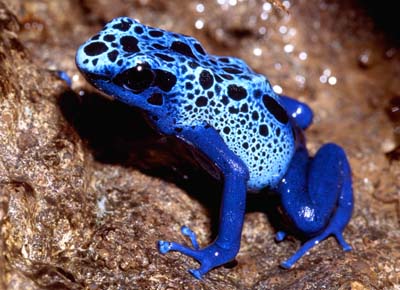 There are some palatable species which mimic the warning coloration of unpalatable species, thereby profiting from the model. It is an uneasy tightrope to walk. If the mimics become too numerous, predators do not encounter the unpalatable models often enough to learn the association between the color pattern and the nasty taste.

The third use of color, alluded to briefly in the opening paragraphs, is as camouflage, to hide the animal (or plant) from visual hunters. The adaptations of body form and color are so wide-ranging that they have been the subject of innumerable books. However, no matter how you look at them, elephants remain indisputably elephants and impossible to confuse with passing trees or grasses.

Are elephants color blind? I don't know the answer to this question although I am certain that someone does. I suspect that they are, like most mammals apart from the primates. If so, it would do elephants little good to glow Raja raspberry when they are ready to mate. Anyway, as has been very well established, elephants detect sexual readiness by olfaction, not by vision. This goes some of the way to explaining why elephants are not brightly colored but it still doesn't explain why they are such a dull insipid gray.

Bereft of camouflage and sexual displays as possible reasons for brighter colors we are getting perilously close to believing that elephant gray is a neutral adaptation. Not quite. There are, as I see it, two further possibilities to explain the color.

Animals can be any color they like, within reason ... at least there are no colors that it is not possible for some animal species to manufacture. Manufacturing colors has an environmental cost which must be weighed in the evolutionary balance sheet against the gains which may ensue. It takes energy to produce a particular color and the chances are that the more spectacular the color pattern, the more costly it is in energy terms to produce. In other words elephants may be gray because it costs too much energy to make them any other color. Is gray still a neutral adaptation under this scenario? No! If this is why elephants are gray, then there is the evolutionary advantage of less energy expenditure to be gained from being gray.

I believe there is a further possibility. Elephants and other large gray animals such as hippopotamuses and rhinoceroses have trouble ridding themselves of heat. Black radiates heat most efficiently but by the same token also absorbs it quickly. White reflects heat but is an inefficient radiator. If elephants were white they would not rid themselves of their body heat quickly enough; if elephants were black they would rapidly overheat when out in the sun, although they would radiate efficiently when in the shade (assuming they are warmer than their surroundings). Gray may turn out to be the right compromise color for heat balance in large animals and thus would be anything but a neutral adaptation.

A few years ago, before they got carried away with dreams of vividly colored dinosaurs, artists depicted species such as Apatosaurus in elephant grey  perhaps they were right after all?