Paddy was born in England and moved with his family to Jersey in the Channel islands. Here he was first introduced to nature and fell deeply and irrevocably in love with the natural world. When he was seven his family made the decision to emigrate to New Zealand. The New Zealand sojourn was short and inside a year the Ryans moved again, this time to Fiji. Paddy's four years in Fiji confirmed his love for islands and Fiji in particular. Fiji was to play a big part in his future.

When he was ten Paddy was sent to England for a year before moving back to New Zealand in late 1962. Five years at Rangitikei College in Marton followed. These were five very interesting years and Paddy utilized them to the full becoming a member of the cricket, softball, rugby, gymnastic, athletic and debating teams. This broad experience stood him in good stead when he applied to go as a school leaver volunteer on New Zealand's Peace Corps-inspired Volunteer Service Abroad.

At the tender age of 17 and three months Paddy went to Sarawak in Borneo where he taught for a year at the Marudi Government Secondary School. This year included some exciting adventures including a crossing of the mountain range dividing the catchments of the Baram and Rejang rivers plus a few other experiences he can't share on this web page. But perhaps the enduring legacy of that year was a single lens reflex camera and the knowledge to develop and print black and white photographs, taught to him by Mr Karapat, the science teacher. 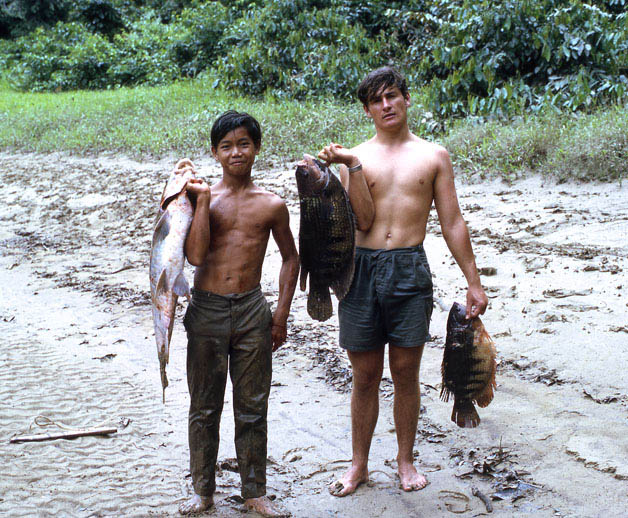 Paddy and friend up the Tinjar River, Sarawak, 1968


On his return to New Zealand Paddy went to the University of Canterbury where he obtained a Bachelor of Science degree with first class honours and a doctorate, based on his thesis "The ecology of the short-finned eel, Anguilla australis schmidtii in Lake Ellesmere". It wasn't all work. Sport loomed just as large as study, sometimes to the exasperation of his professors. The highlight was playing rugby, on the wing, for Canterbury Juniors. Armed with a brand new degree the next question was a job. Fiji beckoned. After three attempts the newly minted Dr. Ryan got a job on the faculty in the Biology Department at the University of the South Pacific in Suva, Fiji. That same momentous year he also got married to Felicity.

Ten and a half wonderful years followed, accented by the birth of daughter Sarah in 1986. The ill-advised military coups in 1987 and changed working conditions caused a re-evaluation of where the Ryans were going. Another move ensued, this time to Greymouth on the West Coast of New Zealand's South Island where Paddy worked first as a freshwater biologist and then as an environmental planner. On the day Paddy arrived back in Christchurch, daughter Lucy was born.

1988 saw the publication of the first edition of Fiji's Natural Heritage, followed in 1994 by Wild at Heart and The Snorkeller's Guide to the Coral Reef. Paddy got numerous freelance jobs during this time including working as "fixer" for the BBC and Television New Zealand and doing photographic jobs for New Zealand's Ministry of Foreign Affairs and Trade and for a German publishing company.

In 1994 Paddy was made redundant, this together with the stresses brought about by the constant travel associated with his environmental consultancy business led to an amicable split with Felicity in 1995. In 1996 Paddy met Kathy (through the internet) and Paddy relocated to Colorado. In August 1998 Fiordland Underwater ... New Zealand's Hidden Wilderness co-authored with Chris Paulin,was published. It was the inability to find a US distributor for this book which led to the setting up of Pacific Island Books. In 2000 the second edition of Fiji's Natural Heritage was published.

Kathy and Paddy parted ways in 2011 (mostly Paddy's fault) and Paddy now lives with Laura in Denver. In the summer of 2011 Paddy drove to Costa Rica and back traveling through Mexico, Belize, Guatemala, Honduras and Nicaragua before spending two wonderful weeks in Costa Rica. Although he had company on the way down, he drove the entire way back solo.

In July 2013, Laura and Paddy dived in Lake Malawi and got a brief glimpse of the extraordinary cichlid diversity there. They followed this up by climbing Mt Kilimanjaro (19340 feet). Paddy has almost completed a 45 minute documentary on this (using a Canon 5D MKII so it is BluRay quality).

2014 has already been an extraordinary year: The Rocky Shore: A guide to the intertidal plants and animals of Wellington's Taputeranga Marine Reserve was published by fishHook Publications. The lead author, Chris Paulin, is an old friend of Paddy's. In February, Ryan Photographic published Paradise in Fiji a hard cover, 144 page "coffee table" book on Taveuni. This was done in conjunction with Paradise Taveuni which is owned by friends Allan and Terri Gortan. The book deals mostly with the diving but includes some of Allan's recipes and a few of the topside flora and fauna. To round off a busy February Paddy took a Personal Trainer Course certification is now impatiently awaiting results.

Paddy is an enthusiastic diver and has logged over 1100 dives in a variety of habitats. He has contributed to Sports Diver Magazine and is a PADI qualified Dive Master.

Paddy doing what he enjoys most?

Dr. Ryan currently works as an Adjunct Associate Professor at the Colorado School of Mines. He recently worked as a full Professor at Johnson & Wales University in Denver. He also does freelance nature photography and gives public lectures on a regular basis. He is working on several new books and pursuing his photographic career with enthusiasm.