One of the myths perpetuated in Fiji even by people who should know better is the mongoose myth. The mongoose myth runs like this: the mongoose was introduced to control the population of a venomous snake that lived in the cane fields. It did this so successfully that the snake is no longer found there. The truth alas, is rather more mundane. The mongoose was introduced to control the rat populations, which it did extremely well. Unfortunately it also controlled nearly all of Fiji’s ground-nesting birds at the same time. As with most myths, even modern ones, there is a grain of truth in the story. We do have a terrestrial venomous snake, which must come as a bit of a shock to those people who claim that Fiji is snake-free apart from the pacific boa. What is even more surprising is that the snake is an elapid. In other words it belongs to the same family as the Indian cobra and the Australian taipan. Never fear though, until recently less than twenty specimens of this snake, Ogmodon vitianus were known to science.

From the records of the early naturalists we knew that Ogmodon, bolo in Fijian, was probably a burrowing snake. As a result it would be very rarely seen even if it was quite common. Its burrowing nature was confirmed when a specimen, found a metre down in soapstone rubble, was brought into the Fiji Museum. Unfortunately, the owner would neither let colleague John Gibbons nor me photograph the snake. To add insult to injury the snake escaped from its container and was probably snapped up by a passing mongoose. John Gibbons though was a very persistent man and he launched a one-man "find Ogmodon" campaign throughout central Vitilevu. In time he was successful, a juvenile about 15cm long was brought into the Biology Department at the University of the South Pacific by a villager from the interior. Juvenile bolo can be distinguished from the adults by the possession of a cream chevron between the eyes. Juveniles are also darker than adults, almost black compared with a smokey-grey. Unfortunately this specimen soon died, almost certainly from dehydration, although neither of us realised it then. 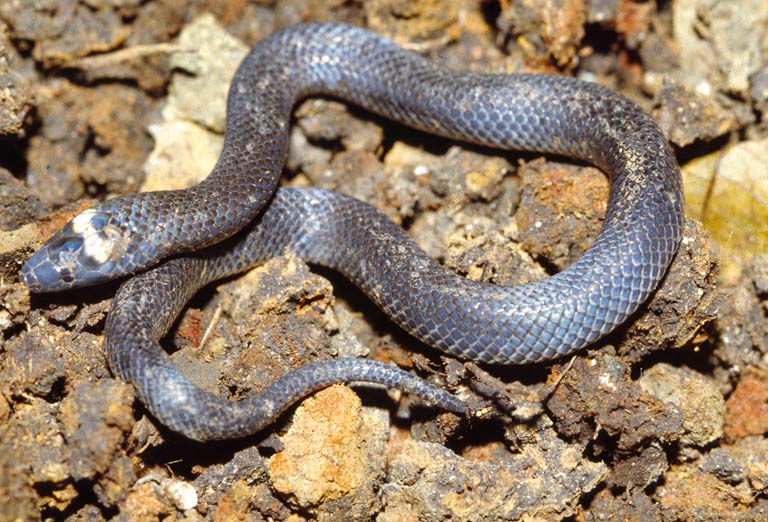 With time the trail grew cold, John obtained another small specimen, crushed almost beyond recognition by a car (some unkind people claim you could read "Dunlop" on on the animal) but that was it. The reason was simple, the villagers concerned believed that bolo was a harbinger of death, a bad omen of the highest order. Even the substantial financial reward that John offered was insufficient to over-ride the superstition.

Thinks looked bleak until George Zug of the Smithsonian Institution again visited Fiji. George has been a source of inspiration to both John and me, one of those rare academics who enthusiastically shares his knowledge. John felt that the Namosi area would be likely to yield bolo so the two of them made the trip to Saliadrau -where they spoke to the villagers about the snake. The people of Saliadrau claimed to be familiar with bolo. They said they encountered it regularly when planting crops. The two herpetologists came back full of enthusiasm although I was sceptical. When people ask whether you want 5, 10 or 20 of one of the world’s rarest snakes you have a right to be sceptical.

One week later the three of us went back to Saliadrau. To our utter delight the villagers were as good as their word. Twelve Ogmodon were brought to our astonished gaze and a delighted George Zug had to dig very deep in his pockets to pay for them all (no credit cards for bolo at Saliadrau). After the transactions were all over we sat down to some very serious kava drinking, all of it green and it went straight to our heads (don’t let anyone tell you that grog isn’t a drug). We returned to Suva reluctantly even though the incredible Namosi scenery made us a little happier. All of these specimens went overseas to museums, consigned to such indignities as chromosome counts and pickling. Over the next few weeks more specimens came in, one a large (30cm) and apparently pregnant female. The Saliadrau villagers told us that the female gives birth to live young but the discovery of 2-3 ellipsoid eggs in a female makes this unlikely unless the young hatch while in the oviducts. They also told us that the snakes burrow in the soil underneath logs during the day and move up to the log to feed at night.

If you hold a large specimen it will wriggle but makes no attempt to bite, instead they produce an unpleasant rather pungent odour. John noted that the snakes are more aggressive at night but I haven’t seen this myself. We still know nothing about the toxicity of their venom. Earlier writers mention that they could never get them to strike and no one has yet tested the venom. I expect it is fairly mild, after all, if you feed on earthworms and beetle larvae you don’t need a powerful venom, furthermore the snake is so small and has such a tiny mouth that I seriously doubt whether it could penetrate human skin. In the absence of other information though it pays to play safe.

The next question is how did it get here? I don’t claim to know the answer to that; I leave it to the biogeographers. Its closest relatives appear to be in the Solomon Islands and Australia but it must have been in Fiji for a long time to diverge so far from its cousins. A 1998 article by Keogh, Shine and Donnellan based on ribsomoal RNA sequencing suggests that bolo's closest relative is the New Guinean snake Toxicocalamus preussi. I doubt that we will ever know the full story about bolo but there is one moral that I have learned from this exciting saga ... never under-estimate the Fijians living in the interior. They may have answers to lots of our biological problems but we just don‘t know the questions to ask. For more pics of this rare snake click here.