The Fiji tree frog (Platymantis vitiensis) is probably rarely seen rather than rare. Because it spends most of its life above ground it does not compete with the giant toad for food and it is not frequently exposed to predation. The eggs are laid in the leaf axils of the pandanus, and presumably in common lily Collospermum montanum from which I have collected a large number of adults. There doesn’t seem to be any evidence to suggest that the adults stay with the eggs. Little is known about their mating habits although it is possible that fertilisation is internal. I used to think that they were mute, as in over 50 hours in the rain forest studying them I had never heard them produce a sound. This view changed rapidly when I showed Fang, my pet boa, some captive specimens. Before I had a chance to do anything, Fang had a struggling frog in her jaws. This animal produced a loud and penetrating scream, which is presumably designed to warn other frogs of danger. The unfortunate tree frog puffed up with air and resisted all of Fang’s attempts to swallow it. I released the hapless frog and it settled back down, full of puncture holes from Fang but apparently otherwise just fine.

Fergus Clunie, the ex-Director of the Fiji Museum kept a pet tree frog. It started to call … a soft double tap drip noise, repeated at regular intervals. This was exciting enough but better was to follow. Fergus thought the animal was a male, a view that Fergus had to change when it laid a clutch of eggs. Calling in female frogs is not totally unheard of but there are few species in which this behaviour is known. Sometime later John Gibbons heard a male softly replying to a female call. In 1997 French researchers Boistel and Sueur confirmed these observations and published additional information about the calls. The female tree frog lacks a vocal sac and her call is not as complex as that of the male.

We know a little more about their breeding habits now too. I was fortunate enough to observe a captive pair in amplexus (the term for amphibian mating). They looked rather strange as the female weighed six times as much as the male. The large 10g female was clamped her groin by the little 1.5 g male. Frogs are a little more restrained than human beings as regards mating position; no Kama Sutras for them. The majority uses an axillary grip in which the male clasps the female around the armpits, while the rest use an inguinal position in which he grasps her just above her hind legs. The tree frog uses an inguinal position but we know nothing as yet about the ground frog.

I have collected and released over 500 tree frogs from various localities. They display a bewildering variety of colours and patterns. With 70 frogs from Monasavu in front of me I tentatively sorted them into 18 different colour patterns, but even then the decisions were totally subjective. Colours range from light creamy grey through browns, tans, orange, greeny-greys (but no true greens) to brilliant yellow. Hourglass shaped dark markings between the shoulders and the eyes may or may not be present. Some have a thin white streak down the back, others a broad yellow stripe. Reproductively mature individuals have a brilliant yellow flash inside the thigh and groin. 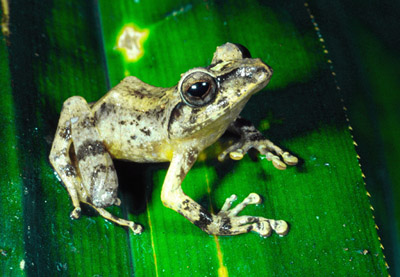 From field experiments I have found that frogs spend much of their time in the same tree. If they do wander, it is usually to low shrubs adjoining “their” tree. The wetter it is the further afield they appear to move. These little frogs are accomplished jumpers and nearly always twist in the air so as to land facing a different direction. As the next leap is often at 90o or even 180o to the direction expected they frequently elude capture.

I have just returned (Aug 04) from a wonderful visit to Fiji. During this trip I made the drive to Namosi. More in hope than expectation I visited a small grove? of giant swamp taro by the side of the road. To my delight the eight or so plants contained over a dozen small (less than 2 cm SVL) tree frogs. All were in the water-filled leaf axils and all initially were oriented head upwards but turned and swam further into the leaf axil when disturbed. I suspect they were "young of the year" from eggs laid in December or January. It is encouraging that such a casual investigation revealed an apparently thriving population. I'll post photos of these froggies when my slides are available (anyone want to give me a Pentax ist-D?).

The future of the tree frog is probably secure, but life is much more difficult for the ground frog (Platymantis vitianus). I suspect that the giant toad and the ground frog compete for food. The ground frog does not always hunt prey in the normal frog manner. That is, does not always flick out a long sticky tongue to catch prey. Instead, ground frogs sometimes leap at flying or crawling insects and catch them in the mouth. The hands may assist in subduing struggling food. During the day they under logs or lie immobile pressed flat against the ground in a small depression while at night they come out and hunt.

According to most authorities the ground frog is a rain forest inhabitant. Gorham has found them along the banks of streams and states that they are expert swimmers and that there speed in the water “reminds one of a fish darting”. However in Seemann’s time they were apparently more widespread and as he said (1862): “A large frog, Boto or Dreli (Playmantis Vitianus) (sic) is common about the swamps.” Perhaps they were more widespread until the introduction of the giant toad or the mongoose and have been steadily eliminated from their former range until only the rain forest is left as a habitat.

Whatever the true situation, my preconceptions of ground frog distribution received a rude shock after a visit to Viwa Island in Bau Water. My generous and gracious Fijian hosts assured me that ground frogs were found along the beach at night. I was highly sceptical but nonetheless ventured forth when it got dark. I was all set to give up after an hour’s fruitless search, when we suddenly secured our first specimen. A very large bare-footed Fijian trod on the poor animal and let out a blood-curdling scream. I duly measured, weighed and toe-clipped this animal and by the end of the evening seven frogs had received this treatment and I had become a believer. This evening marked the start of regular visits to Viwa to collect data, and to really rub salt into the wound, so to speak, one of the frogs produced a large faecal pellet, which contained the remains of a crab. Why are the ground frogs on Viwa so unusual? I suspect that they are still present on Viwa because there are no mongoose there. Whatever the reason, this is an unusual habitat for a frog, reminiscent of P. papuensis in New Britain or even the crab eating frog Rana cancrivora in South East Asia. Perhaps one of these Asian salt tolerant frogs made the journey to Fiji via the Solomon Islands.

Although supposedly closely related to the tree frog, the ground frog is much larger, growing to 106 mm snout-vent length, compared with 54 mm for the tree frog, and does not have adhesive suckers on the fingers. Despite this it can still climb and occasionally can be found up low bushes. On Viwa they must be capable of negotiating almost sheer banks unless they hide under beach stones during the day. They are marvellously athletic and can cover up to 1m during one leap. Unlike most frogs they can put together a series of 10 to 20 giant leaps in a row. During the weighing operations on Viwa one disgruntled individual got away from us. We had to run 40m down the beach after it and were lucky to recapture it.

When threatened they will puff themselves up with air and also release copious quantities of bladder water. The air makes them look bigger and the loss of bladder water distracts a predator and makes the frog considerably lighter and thus capable of greater leaps. When under duress they will occasionally vocalise with a series of short, almost birdlike croaks.

Unlike the tree frog, P. vitianus does not exhibit a huge range of colour pattern. Usually they are a dull grey-brown but reddish and light tan individuals do occur. Some possess a thin mid-dorsal line and nearly all have a white spot or blotch behind the eardrums. Ground frog eggs have not been reported from the wild but captive specimens have laid eggs. Development is similar to that of the tree frog.

The two native frog species differ from the introduced giant toad (Bufo marinus) in a number of ways. The most important is their lack of a free-swimming tadpole stage. The large (7mm) eggs contain sufficient yolk for the larva to undergo complete development in the egg. I have studied a number of tree frog nests and have reared them through to froglets. The metamorphosis is fascinating. The baby frog starts off life as a fertilised cell lying on top of a large pale yellow yolk. The eggs are crystal clear with the yolk filling approximately half of the volume. They look very similar to small glass marbles. Over the next two to three days a streak develops along the yolk as the cells divide. It soon curls itself to form a tube. By five days a head and tail can be distinguished and limb buds have formed. The embryo becomes progressively more frog-like and often rotates rapidly inside its self-contained swimming pool. The developing frog lies on top of the yolk until around the second week when its weight causes it and the yolk to rotate and lie upside down. The froglet stays this way until near the end of the fourth week, when it once more rotates to lie on top of the yolk. It remains in this position until it hatches a few days later. The young frogs don’t feed for at least five days after hatching for they continue to use up the still substantial yolk deposits. 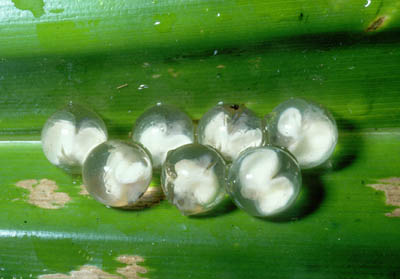 The phenomenon of direct development eggs is of particular advantage to amphibians living in or around fast-flowing streams, as it enables eggs to be laid away from water, thereby avoiding the possibility of eggs or tadpoles being swept away. It also helps enormously in colonising islands that have little free water.

Opinions as to how our frogs arrived here differ, but there are two possibilities. Either they were introduced by man, deliberately as food or accidentally in vegetation, or they made their own way here by rafting or on ancient land bridges. I tend to the view that they made their own way here. If man introduced them, they could be expected to be found on all inhabited islands with suitable habitat, but they are not.

For more photos of these interesting animals check out this link. For A Field Guide to the Herpetofauna of Fiji by Clare Morrison click here. For Fiji's Natural Heritage by Paddy Ryan click here.